Welcome to the Social Media Revolution 2011

Social media is here to exploit your last sanctuary: your cognitive surplus.

The energy left when we are done with our work day, now gets put into social media. Aggregators such as Facebook and Twitter, both serve the horizontal market. And there are those aggregators such as linkedin, serving a vertical market, that of professionals amongst the population. Aggregators consolidate and remarket the content through a central platform. The consolidation of content, if remarketed or not, contradicts the decentralized nature of the internet.

If Facebook were a country it’d be the world’s 3rd largest.

What is happening to us now has happened before. Remember when tacky town malls replaced our neighborhood grocery stores?

With increasing consolidation of web content the governing and ownership of the information changes hand. Facebook now owns your content incl. pictures unless you have explicitly expressed your veto a couple of weeks ago. Apple Inc. may have found a passage to successfully introduce their OS X and iOS 5 system to the corporate environment with their introduction of the iCloud. It would certainly be appreciated and make sharing easier on businesses and ad industry. iCloud is an 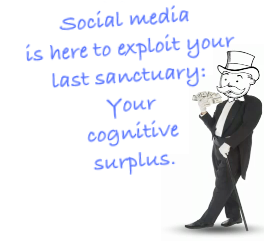 aggregator as well, so is iTunes. With iCloud entering the market come autumn, the user data of the 46 million Apple customer base will be moved into the cloud. Alas, the data will be centrally stored in the new Apple Inc. data center in Maiden, North Carolina, USA (pictured below) rather than being de-centrally distributed around the world. That’s right iCloud is not a huge hard drive circulating the earth with other satellites but a data center in North Carolina.

By the end of 2009, I stumbled upon IPA social: 10 principles. Principles, that have served as valuable insights up to date, when it comes to engaging with social media, be it for marketing or personal endeavors.

Even back then, these sharp minds, who each contributed their principle, would have wished to have called it social without the media part. Media is social by default. Back then it was predicted that social media would become less social.