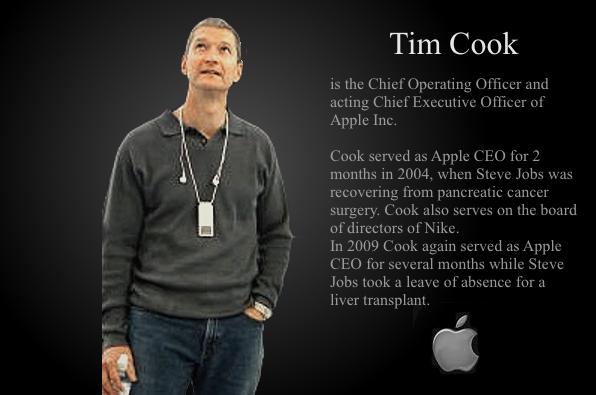 [column width=”47%” padding=”3%”]
At a lovely dinner at friends on Saturday¹, a bit of concern was raised with Apple and the well being of Steve Jobs as may be the case with many stakeholders, now that Steve Jobs is on his third medical leave. I looked up Tim Cook and got myself acquainted with the 50 year old COO and acting CEO of Apple Inc. Tim Cook was appointed COO in 2007. Prior to Apple he held that position first with Compag followed by 8 years with IBM.
A southern gentleman, Mr. Cook remains cool, calm collected and understands to stay friends even with partners he needs to cut down on business in a relentless effort to make Apple’s operations more efficient. Tim Cook can rely on an enviable talented and likeable executive team at Apple.

[/column]
During my technology driven career, I had admired Steve Jobs in presentations at the Moscone Center and at the New York World Trade Center prior to 9/11. I upset my family when I voted for Ross Perot in an attempt to support Jobs with his NeXT computers. When watching a first presentation not given by Steve Jobs, I was immediately convinced of and charmed by both, the pride each presenter took in his work and the modesty at which Bob Mansfield, Philip Schiller and Scott Forstall have their audience listen. Colleagues one would wish for at ad agencies, by which I was always lucky with colleagues I came across on both sides of the atlantic.

¹Cooking with friends—The courage of others
²Little known, much of the design rebellion and with it crucial influence on the desktop revolution can be contributed to NeXT computers, the Steve Jobs enterprise. Much of what made OS X the best operating system was rehearsed and tested back then. My daughters were raised on NeXT computers
[end_columns]