Riverdale takes on the ‘…and back’-part in Netflix’ transform share,
suggested in the following outline of game changing attributes. 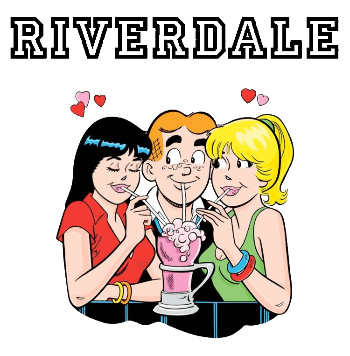 “Riverdale,” the new high school noir on CW, is a dark, weird reimagining of the Archie Comics franchise. Which raises the question: What was the non-weird version?
– James Poniewozik

The subscription-based streaming media service founded in 1997 by Reed Hastings and Marc Randolph in Scotts Valley, California by 2016 operates in 190 countries in its role as disruptor and digital transformer.

By moving away from Hollywood’s big idea, that of capturing an audience to watch a blockbuster movie at their favorite movie theater (what’s a movie without a theater?) must have had the greatest impact on transforming the audience’s viewing behavior. It added numerous unforeseen opportunities to get the viewer hooked to a story by telling it in sequels. It made place for ideas in storytelling that couldn’t be told in a one time event. A story that up to then, was told as if a book had only one chapter, now gets told as a series, one chapter after the other. The audience grows so very familiar with the characters of that story, they consider them part of the family. Netflix Original serial storytelling became part of the conversations run in the family. Even more so as you can keep watching for hours and even days, should you get hooked as I got glued on watching ‘Prison Break’. The screenwriter can make use of running jokes to name just one idea that is added by continuous story telling.

Back in a time when my flight mileage was particularely high, I learned the you can indulge in a movie by watching the tiny screens mounted in the back of you the seat before you. You could completely ignore the world around you and the passenger seated next to you.

In my personal light user experience, the world’s largest digital media and entertainment company has introduced a new aesthetic to film making, the actors spend less time in their dressing room and come across more like real humans as we are accustomed to each other in everyday real life.

Before crowdsourcing had its day, I was invited by crowdsourcing agency Victors & Spoils to join the creative team to come up with a proposition to help prevent Hollywood studios fall into oblivion. None of the above had been defined as contributing factor.