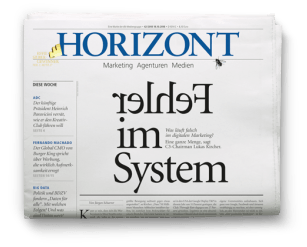 “But in fact, gigantic monopolies have been created, with new middlemen dominating customer access. neue Middlemen, die den Kundenzugang beherrschen. And they’re now in charge of asking for some sort of monopoly dividend.

From 2017 to 2018 0, the Google’s display tkp increased by 51% in the United States and the cost per click is up 83 percent, while the click-through rate has decreased by 27 percent. Pretty much the same holds true for customer acquisition costs—the hard currency in the digital marketing.

In a recent study, Adobe comes to a devastating result: The CACs have increased five times over the past two years than inflation! All this, even though we are experiencing an allegedly increasingly more efficient digital landscape and better targeting. I’m very surprised at how little this is discussed.”

“Direct to consumer brands”. In other words, companies that rely on a direct relationship with their customers and on content and the creation of communities.

As before, when Kircher with founding partner Burkhardt were responsive with an invite to business lunch toward the request of a hungry graphic designer, the Austrian is on his toes with what may be a cardinal fault of digital economics, he seeks to disrupt.

Easier done than said, all you business people need to do is to decide in favor of a platform for your business, that is by all means owned by you, open source and safe to stay in your ownership in the foreseeable future.

A place on popular social media aggregators won’t guarantee any of that, keep social media in mind though to drive traffic to a business place owned by you, and create your own community with content and the help of newsletters.

Thereby the execution and design won’t necessarily need be contracted to a renowned company, an 18-year-old developer may often be done faster and far more affordable than a renowned company with its administrative overhead. I take it that small businesses in the US are long aware of the effects.

Make sure though that the briefing states for all measurements and tools to be used be open source.

More often than not student just out of coding classes are the better copywriters equipped with amazing talent for branding.