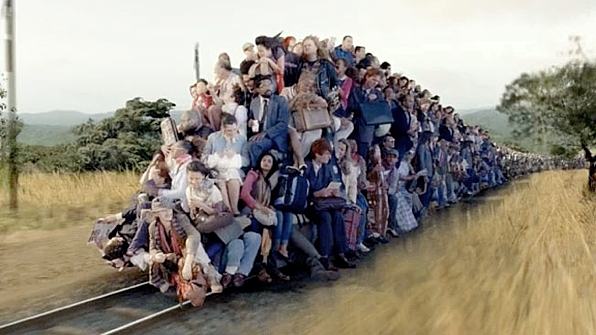 The notion of the sound of whispering grass returning to our cities.

Why we have to be radical

On your side of the atlantic, chemical corporation Dow teamed up with Draftfcb Chicago to make us all hop on board in support of noise reduction technology to make trains travel more quietly through urban areas.

On this side of the atlantic, they have engaged in quite the contrary. How to make silent electric cars fill inner cities with a new breed of roaring motor noise (details).

No joke. This is why we have to be more radical in our thinking, in how much effort we make to even capture the magnitude of an issue and get to its origins.

In China people blow their horns.

The Italians with less organized traffic regulation are paying better attention and act more individually in traffic and elsewhere. Have you ever driven a car in Rome?

Would anyone want our inner cities sound polluted with artificial e-motor noise, when you could hear the crickets in midst of our metropolitan areas in 2030?

How did this shortsightedness creep in?

A regulation by the trade commission of the United Nations with uncritical coverage of the degenerated German trade press WuV, incapable of even reaching half the standard quality of US Papers such as Advertising Age.

How did the UN come to such decision?

Was there a hackathon, a public hearing?

Any crowd sourcing activities involving those who it will concern most?

So yes, this is why I am so relieved that Gareth Kay returned from Toronto with his presentation deck: Where are the radicals?

Learn more about why we have to be radical here