Maslow’s hierarchy of needs is often portrayed in the shape of a pyramid, with the largest and most fundamental levels of needs at the bottom, and the need for self-actualisation at the top.

Self-actualisation embodies striving for the development of the own personality (or brand).

The single most important function for any business to do well and stay in the blacks, is to continuously create new meaning for the brand.

Relevance, reach and getting people interested and involved on their own terms are determining factors over success or failure.

Sales promotion is a means of support for the brand’s viability, allowing the business to continuously create new meaning for the brand.

Again all my friends drive Porsche and again everyone is convinced, Porsche is the best road car ever built.

Is everything happening at your fullest satisfaction?

A question perhaps most suitable for entrepreneurs and businesses to respond to every now and then. Not what you do but what people do with it determines your success or failure.

“We live in the age of ideas that do” is Gareth Kay’s directive who was recently promoted CSO of Goodby.

When the Beatles had reached their peek with the Britisch Invasion they turned around and reinvented themselves with Sgt. Pepper's Lonely Hearts Club Band.

A German saying insists that success has many fathers (failure remains an orphan).

If identity was an operating system, ‘Selbstverständnis’ would make up its kernel.

No evaluation of suitability by third parties is neccessary, needed or acceptable. By default ‘Selbstverständnis’ posseses great clarity. Human beings and brands must know what they want and what they can afford.

Nike, after all a shoemaker, is the world’s greatest sports enthusiast. For Nike it’s all about the athelete, not the dollars and cents earned with every shoe sold.

At young age, I wondered when watching the four Beatles sing, why it won’t gross them out to be singing in one microphone. I was always most impressed with the Beatles’ display of friendship, perhaps even more than with their music.

For the Beatles it wasn’t about the money, they earned plenty with record sales when taking the risk to change their fan’s lives with introducing them to the Sgt. Pepper Lonely Hearts Club Band, and creating new meaning for their Beatles brand. A change of business plan that was, not merely a promotion (even though looking back it was just that, a marketing trick).

It was about learning, gaining experiences and expanding their horizon.

In the following their huge following took on the learning curve and thanked them with their loyalty. Every other Beatles song came as a complete surprise and kept the followers busy for decades to come.

In retrospect, no vital sign of self-actualisation became obvious in Whitney Houston’s development. 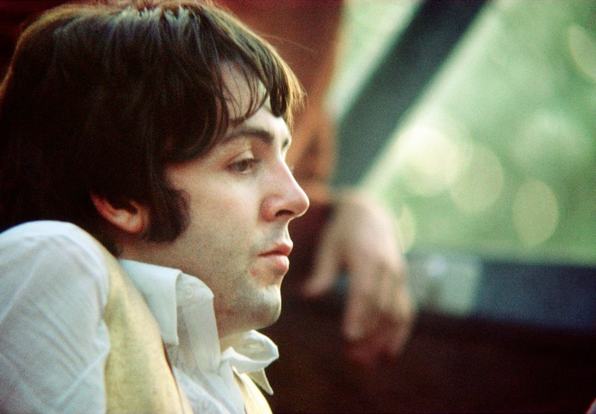 Effort and efficiency: How much for this world?

Entrepreneurship and branding presuppose good self understanding (‘Selbstverständnis’) and the clarity that comes with it.

The later protects you from foolishness and keeps you from giving in to the herd impulse (think of Facebook followers).

How very much effort is needed, is best demonstrated by Beatle Paul McCartney and the effort it takes a musician with a Beatle reputation to sell records of his own in the post digital age.

A world class musician who can long rest on his laurels with earned capital, must scramble to sell a record.

Paul McCartney has tried every trick of the trade, such as a no Logo campaign and excellent music with the Fireman, integrated marketing for Memory almost full – with a brilliant website, iconographic world class cover and brilliant music.

Paul McCartney is handling between 2-4 website incl. social integration at any time.

Management of continuity is key and coming up with surprises is harder for one who we expect surprises from.

Seth Godin came up with a feasible explanation only yesterday on how effort is no longer a competitive advantage.

“Just in time, the economy is now rewarding art and innovation and guts. It’s rewarding brilliant ideas executed with singular direction by aligned teams on behalf of truly motivated customers. None of which is measured on the clock.”

The joy of doing affords effort and the needed persistence as well as the learning curve when dealing with digital and ever more sophisticated customers.

Development is a friend.

Paul McCartney is looking good to me and happy alongside of his wife Nancy. 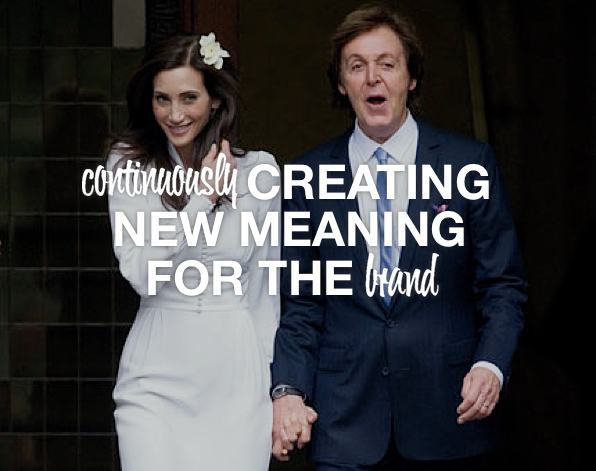