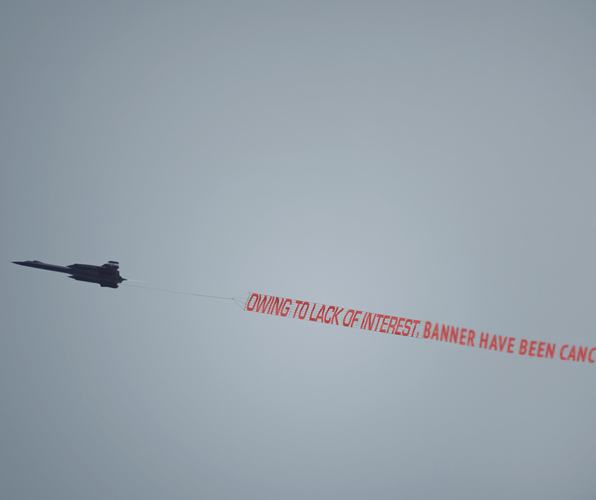 Letters dragged by an aircraft.

What are performance banners?

Letters dragged by a an aircraft in areas with a high population density.

It’s Monday morning and its back to work with those pesky performance banners you couldn’t get your hands around last Friday.

Besides you are probably faster pulling it of the net.

Introducing the all new SUV

Refrain from silly special effects, moving parts and anything to distract the reader from what she came here for, which is read the article where the ad is placed.

If you want to be good, do some good for the user.

Banner may come to support a long idea

Gareth Kay describes it as a process whereby brands are moving towards creating many small ideas to create the long idea.

Experiment with placing little bets. Think along the lines of a tv series rather than tying to produce a blockbuster motion picture. Movies are having a harder time now, to even reach the standard of quality and entertainment good tv series provide.

Now if you wish to get into the topic even deeper, here’s a great film on how great ideas are moved into the new world. By Google. If you have an hours worth of time go here and allow yourself amazement.

Perhaps it’s time for a bit of Jeremy Clarkson, Richard Hammond, James May und the Stig? These four beatles add fresh thinking to the automotive industry. BBC Top Gear has 150 Mio viewers worldwide and has become mandatory to watch. View TopGear on YouTube.