This is great! All you got to do is listen in and wait for others to come along and express likewise feelings toward your long felt insights. And they will come.

I am blessed with a rather extensive list of favorites. Heroes of mine. To expel, deny or ignore proven masters and their contributions, was never a good idea and of course nothing could be more true than what David Ogilvy. Leo Burnett, Bill Bernbach, Clause C. Hopkins, John Powers… have believed in all along. 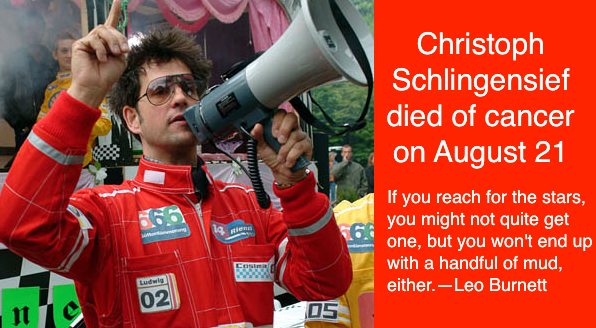 Excuse me while I digress

With the exception of Christoph Schlingensief, Michael Schirner, Thomas Meinecke, Heinz Schwaiger, Amir Kassaei and Peter Kruse, international references outweigh personal local heroes. By which only 3 are directly involved in marketing, while Meinecke and Schlingensief are thought leaders in cultural affairs to be taken seriously. Christoph Schlingensief then died of cancer only four days ago on August 21. With every appearance on German TV and widely distributed videos, Schlingensief exemplified how putting ideas first and taking action accordingly have an immediate impact on an ever growing following in a population wishing to contribute and share. ‚If you reach for the stars, you might not quite get one, but you won’t end up with a handful of mud, either.‛ as Leo Burnett long stated. And boy, did Schlingesief start off with a handful of mud when I left Germany for the US. And boy, has he made ideas that do popular even before Gareth Kay coined the phrase for marketing when I returned to Germany to go to work for McCann Erickson in Frankfurt.

Back to the future

I am back from the living dead, furthermore expressing my condolences to the dead living, the large number of advertising zombies who have failed to put ideas first… Dead mad men and their dying advertising businesses. Now there is plenty of evidence that ad shops which never expressed doubt to keep their focus on creative and ideas have been laughing on their way to the bank despite the economic recession. BBH to name just one. Followed by a good number of emerging marketing businesses, sporting new business models altogether are doing rather well. Victor & Spoils with crowdsourcing, Edward Boches with Mullen or Gay Gaddis with her T3 think tank besides many shining stars carrying meaningful names such as mother, naked communications, anomaly, barbarian to name a few. I hold dear Edward Boches, Ana Andjelic and Gareth Kay. Here is why:

ideas that do rise to the top