Marketing in the age of post-truth. Now what? 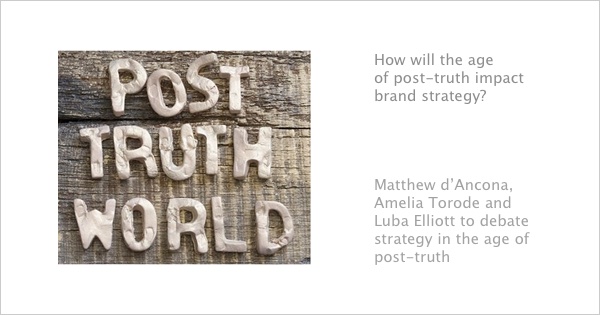 Strategy in the Age of Post-Truth will be held at The IPA on Thursday 23rd November, with tickets from £500 for IPA members and £750 for non-members. To book your place visit the IPA’s CPD Hub. Join the conversation on Twitter Hashtag: #PostTruthStrategy

Following an unpredictable 18 months in politics, ‘post-truth’ (when objective facts are less influential in shaping public opinion than emotional appeals) was named word of the year by Oxford Dictionaries after its usage increased 2,000% in 2016.

Says Amelia Torode, who has gotten me scared before with her Social Principle #8, “This is a not just a training course for Planners, this is a wake up call. This unique one-day session is for anyone regardless of discipline who would like to focus and sharpen their strategic thinking, it is as applicable and as important to creatives, designers and account managers as it is to planners and strategists. Each session will be followed by a “so what” debate on what to take out and most importantly what to do differently on return to agency life.”

To hear more from Matthew d’Ancona, the acclaimed Guardian political columnist and author of Post Truth: The New War on Truth and How to Fight Back, read his blog: