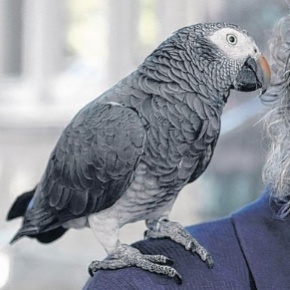 Where in the world is Laura? Township community concerned for 2 weeks. Has parrot Laura disappeared for good?

Munich township Thalkirchen has gotten used to a grey parrot knocking at every other window in the past 17 years, introducing himself with the words: “Hello, I am Laura.” After each day out, the grey bird returned to Ludwig Vogelrieder, who has rescued the parrot from inappropriate animal husbandry in the South of France and promptly learned that the parrot won’t ever spend the time between feedings on a bar nor in between bars.

Thus far it’s been ten times that Laura had disappeared, this time enduring snow and ice for two weeks. Laura ows much of its freedom and safety to Mr. Vogelrieder’s public relations work. He had introduced the bird to local police and fire department, posted tear off wanted sheets on trees in the area and received good coverage on local tv and newspapers.