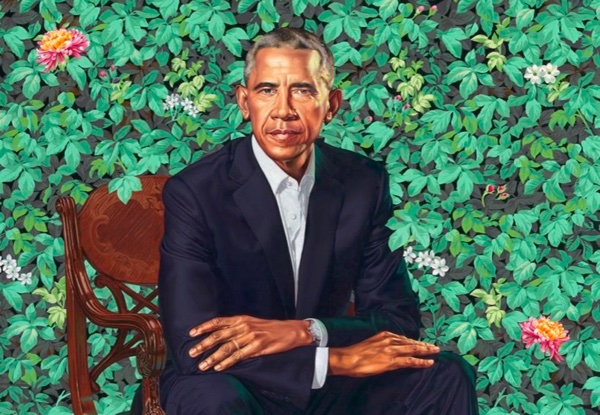 WASHINGTON (The Borowitz Report)—In a televised event that many deemed unnecessarily cruel, millions of Americans were briefly reminded on Monday that they once had a President.
Unsuspecting Americans who turned on cable news Monday morning were suddenly assaulted with the memory of a time when the country’s domestic affairs, international diplomacy, and nuclear codes were entrusted.

Vinson Cunningham at the New Yorker Magazine observes the president looking serious, even slightly ruthless, around the eyes in this official president’s portrait by Nigerian painter Kehinde Wiley. I thought this may be due to a president who wisely chose his words with such confidence and firm determination, and voice.

Contrast sharpens our perception and Obama’s powerful voice stands in contrast to the casual, youthful way he moves.

We’ve been pondering the puzzle what makes this painting stray from the perception we have gained while it’s great for contemporary paintings to resemble cover illustration we know so well. Cunningham’s got point around the eyes, but we think it’s the nose part that’s a bit off, no?

Is it lush Hawaiian vegetation that embraces Barack Obama on his chair to remind us of the participation to the climate treaty of Paris? Or do ugly memories return of ugly attacks over the legitimacy as American citizen? 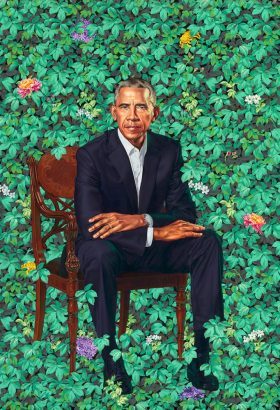 “How about that? That’s pretty sharp,” said Obama, who described the art as “extraordinary”. He said: “It’s my great honor to be here. It means so much to us.”

What we like about fine art, is its generosity to do a painting as if it were an illustration. It could well be due to the nose section that Wiley’s characterisation differs slightly from the perception we have. It defines that fine, teen, mischievous face of the President somewhat rough. It’s the nose that could stemm from a western sherif. It could be Richard Nixon’s nose. Don’t put too much thought into it though, or the portrait starts looking like Humphrey Bogart. None of which I would think of honoring. It extraordinary and great what the Smithsonian has added to its Gallery of President.