Immersive reading: the lighter brighter future of the pub industry 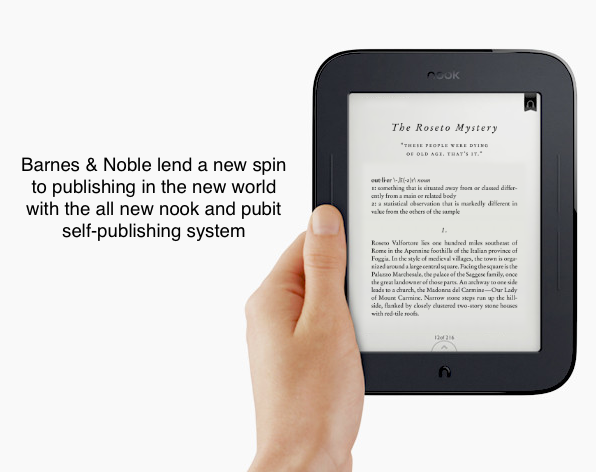 Only yesterday, FastCompany reported on Barnes & Noble’s introduction of The All New Nook, one of the lightest E-readers ever. William Lynch, Barnes & Noble’S CEO may well have re-invented a future for the publishing industry with this Everybody Reader.

Those who are no obsessive digiratis and can live without 3G und Apple store’s apps. The nook fits into a lady’s small purse or the pocket of a man’s jacket, says Ammunition’s founder, Robert Brunner. It was designed by design firm Ammunition Group in San Francisco.
[/column]
[column width=”32%” padding=”3%”]
PubIt, Barnes & Nobles’, software plattform for emerging talent, who aim to publish themselves, represents the other side of good news for the US and internationally.

It takes no effort to imagine, that this new eco system for Barnes & Noble will lend a new spin to the suffering publishing industry around the world. Be it by means of collaborating press associations or by competing, individual systems. Again it’s not over ’till the fat lady sings but it is good to know the fat lady has taken center stage as my daring Dido recently pointed out to me.
[/column]
Valued newspapers such as the New York Times, The New Yorker or Washington Post may perhaps want to collaborate and pass out a reader for free and create a new audience of subscribers. Side by side with a publishing solution such as PubIt they would just as much create a new generation of authors and an open eco system for all.
[end_columns]