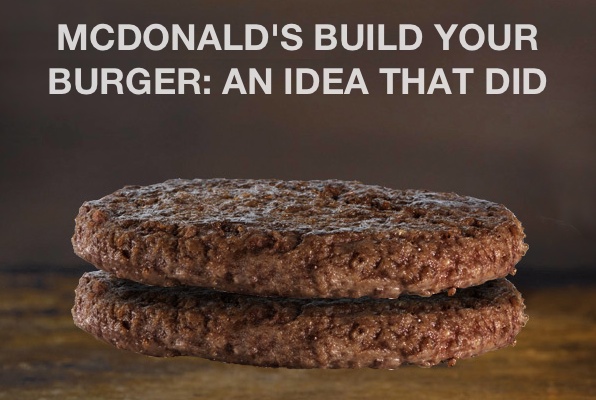 McDonald’s Build Your Own Burger: An Idea that did in Germany.

Ideas that do or brand messages in your face?

A few years ago, ideas that do were far less common than they are today. For one thing, brands weren’t yet sure what to do with consumers who were starting to make noise in social media. Agencies were still stuck in the mindset that the answer to everything was a TV commercial.

True, on the digital side the Razorfish’s and R/GA’s set examples with platforms. And in the more traditional world Crispin Porter Bogusky led the way with ideas like Whopper Sacrifice and in Europe DDB Amsterdam made plenty of noise with fresh thinking and VW’s The Fun Theory.

But they were in the minority when it came to creative ideas getting produced.

Now, however, everyone has caught on. And so we have smartphone apps, Facebook experiences, crowdfunding, staged events in search of virality, customized digital experiences, transmedia product launches, participatory television, you name it.

Four ideas that do via Edward Boches

Cm417.4 ideas that do by Edward Boches

You want to follow yesterday’s proven track record with paid media and are made to listen to ideas that do?

“Ideas that do” was coined by Gareth Kay.

No universal solution, likely your best bet though:

Current best practice of an idea that did?

Find the case study of McDonald’s „My Burger‟ here.

The entry you are looking at a shared entry and closely mirrors Edward Boches’ entry posted on January 29, 2013 with the difference of a changed context.