Bob asked for help with the gui for his condition report app, of which he had sent three screen shots.

Even though ID and UI work with different tools and have different outputs, the design process is essentially the same.

The New York team has mashed up UI and ID to make for an operable prototype which has proven highly efficient during its internal testing period.

During the first two month it became profitable with furnishing affordable condition reports.

With iOS 7 a little over a week away, I’d like to see changes, Apple’s appointed user interface guru Jonathan Ive has in mind for us.

Meanwhile, here are four conditions or user modes obvious enough for their identification to become essential for communicating unique features we aim to make a difference with.

I’d like to think that iPad/iPhone’s built in photo shoot capabilities are suffice, no app integration is required. Otherwise on screen help with positioning the art object and a ‘take picture’ button only appearing when light & positioning is favorable may need to be looked into.

For the user to identify note worthy conditions, she finger paints scratches, water marks or what have you right on the art display previously photographed.

During mark-up or at the users discretion, she can edit her entries using the integral, learned and tried ui element iOS offers.

Sharing includes furnishing the condition report in pdf format with the work place or/and the insurance company, optionally the registrar can share the art image on social networks or the art pinboard supplied by Ready Mades. 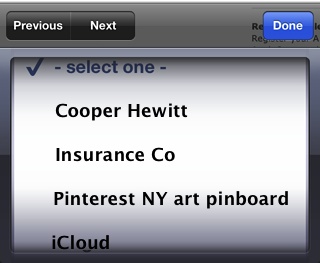 As with any application, first time users will want to set up their app, and while in typing mode, it’s easy to collect additional information such as the insurance company, or alternative address information the registrar may wish to send her condition reports to.

The offer to post art work to a Pinterest art board maintained by ready mades opens another can of worms… It would however help, turn your business into becoming curators.