2 world class best practices on how to build your brand

Some four years ago, I couldn’t keep my browser from pointing out the digital footprints of two human beings. A young photographer from Georgia, United States and a tailor from London, United Kingdom. Each united also in acknowledging what integrated marketing is all about.

All eyes on these two for understanding modern day branding. Both have become the best business practices of choice. My personal heroes of modern day marketing ever since. I have not gotten tired of referring to one or both in most any given week since 2006! 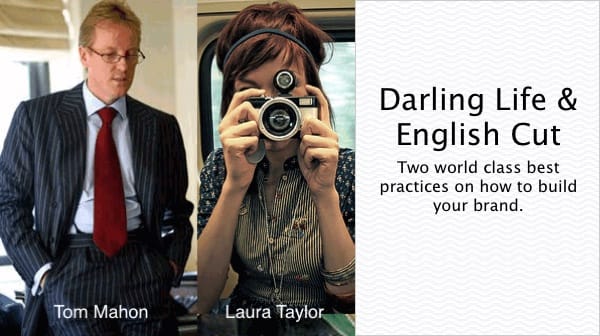 Laura Taylor documented her bucolic life on MySpace. A first step she took to introduce a name for herself as young photographer. She grew a following of 25405 followers by exemplifying a rural lifestyle. A healthy being the rest of us had a longing for. Accomplished with a free of charge MySpace page. Ask your agency how much money you would have to spent on a brand site to gain similar attention. All that Laura had to do, is post a picture once in a while. DIY continuity as the least effort for what my turn out a bona fide business rule! Rather than posting pictures she took, Laura posted pictures that were taken of herself. As the healthy being she is, we all became returning visitors to go look for new pictures of Laura Taylor. I remember being much impressed with each picture receiving at least 20-70 comments. I thought, so that’s how you make friends and gain influence. To gain momentum all she had to do was to change her profile picture. This is pretty much how Laura Taylor conducted her personal brand on Darling Life. It remained a world best practice also on how to deal with security and privacy issues. She never ever compromise her privacy. Nor did I ever notice any indecent attempts by any member of the community (except for one by myself). Which I remove after she had prompted me to do so. Laura Taylor would allow her community insights into her approximate whereabouts. She would take every all along with her. On travels to Egypt where she an apprenticeship as a member of an archeology assignment took her. Eventually more photographs shot by Laura Taylor appeared.
I arrived at the conviction to have discovered a world class photographer in Laura Taylor. She must also be a natural born genius in maintaining her personal brand attributes. Even Interpubic’s Future Brand could learn a thing or two from organically growing a brand . The shift in tendencies helped. Acoustic music and the influence of the hipster culture where becoming mainstream. Movies such as Elizabeth Town or Juno also played a vital role in establishing the brand. I every so often kept Taylor’s MySpace open in a browser window and get a taste of her taste music. It made for a pleasant afternoon’s radio show. Added value in immediate, practical terms. 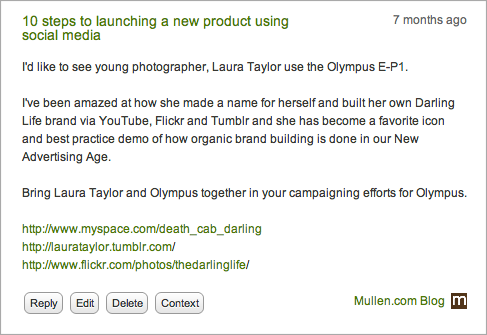 I'd like to see young photographer, Laura Taylor use the Olympus E-P1 (stumbled upon during registering DISQUS Sept 4 2010)

Both, Darling Life & English Cut seem to have been at the right place at the right time. Darling Life with a MySpace page and English Cut with a blog rather than a website. I admire both for their ease of being, not their ease of digital being. Demonstrated adventitious business focus and good business sense. And for getting naked without ever being caught with their pants down. It is this holistic approach to marketing. They relied on what they knew at the time. Instead of reaching out to resources with in-comprehensive lingo. Good use of common sense paired with practical intelligence. A decision that invented a customer relationship program. A appointment generating engine [English Cut].

Laura Taylor and Tom Mahon must have arrived at the conclusion that we all have but one life to live. It to be unwise to break it down into a professional life on one side and a personal life at its opposite side. Common sense and practical intelligence we all wish to arrive at.

Shy away from offers by ad agencies. When they pull out complex case studies or insist on how the whole is more than its single parts. Should your CRM agency not have a proven track record which you can look up on your own. Leave now. Take the backdoor. Run out screaming.

Tom Mahon, a bespoke Savile Row tailor got lucky with much of the same approach to branding as Laura Taylor. Only this time on the other side of the atlantic, in the urban setting of London. Unlike Miss Taylor, Mr. Mahon would likely attract a limited audience to wish to see him get naked. A valid rational to offer what may have triggered Laura Taylor’s early success with Darling Life. Besides Mahon would come in second to Yves Saint Laurent who had occupied that space long ago.

Only recently I learned that Hugh MacLeod had a say in this. Did MacLeod persuade Tom Mahon to make use of a blog rather than investing in a static website? I don’t know. What I know is that Tom Mahon turned his blog into an appointment generating engine at its core.

The trust a brand can build over time with long tail marketing is mind boggling in my experience. Calculating the least effort. Purpose as in an appointment scheduler. Stuff like this. It leads to bringing to completion, a good enough percentage of your business objectives.

• Article in Newsweek featuring Thomas Mahon and Lucy Adams.
• Thomas Mahon Fights It Out in England (Nov. 2006)
Kami Huyse has published some slides on techniques to measure the effectiveness of social media. Here’s what I found on English Cut:

Case study from Naked Conversations by She Israel and Robert Scrible
Find the slide here: Tools and Techniques to Measure the Effectiveness of Social Media

Thomas Mahon wraps it up brilliantly for all you marketers and entrepreneurs:

The main difference I think—between a blog and a website—it took me a little time to discern it. Apart from the obvious we know how they look and how they work. But basically a website is an image and that’s open to the same problems that we all want a good image. So often we tell a half truth and like to dress it up a little bit. But a blog to be successful has to be a—reflection, a true reflection. And if you look at the dictionary, there are big differences between image and reflection. And of course you gotta speak the truth in reflections. There is nothing being hidden and people see that about you and it shows.