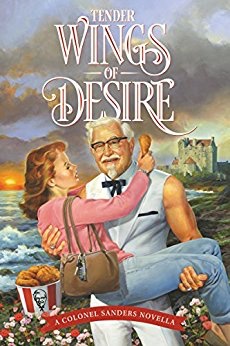 Wings of Desire
The Romance Novel by Col. Sanders. Only 1.09 $ for the Kindle edition

“Wieden + Kennedy continues to take the Colonel in odd directions”

“Sometimes it seemed as though the two of them had been made to love each other, and they tried to do so at every given opportunity.”

Thus begins Chapter 9 of Tender Wings of Desire, the 96-page romance novella ostensibly written by Colonel Sanders as part of a KFC stunt for Mother’s Day. While it’s doubtful that the Colonel himself wrote the tale—what with him being dead nearly 40 years now—what’s even more unlikely is that it’s actually pretty good.

Created with Wieden + Kennedy Portland, which has also been responsible for the brand’s recent litany of celebrity Colonels, the book’s writing is credited to “outsourced author” Catherine Kovach, a former Bustle.com feature writer who also penned a historical fantasy called Evangeline.