Buying power & the sex I was sold on

It is on you to lend support to
American Apparel with your buying power and a little strategic consumption.

Founder and CEO Dov Charney sees nothing wrong with the controversal identity of his brand. He insists, ‘we’ll continue to give the core audience what they want, a real, untampered with view of the creative process at American Apparel‛. 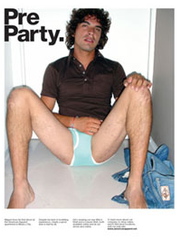 Ad for store opening in Amsterdam

[/column]
[column width=”32%” padding=”3%”]
Back in March 2007, Christina Waechter succeeded with a pro and con write up of the controversies surrounding AA’s marketing, a rather insightful and objective confrontation over the drama of sex in advertising, leaving the decision up to the reader. In command of the German language, read the article here.

It’s give and take… A Canadian immigrant, Dov Charney enabled 4,500 work places in downtown LA with an average pay of $12. He exports his Hipster fashion made in USA to sweatshop paradise China.

Much like Trigema-CEO Wolfgang Grupp, who is popular in Germany for keeping workplaces in the country instead of outsourcing to countries with lower wages.

In contrast to Wolfgang Grupp, Dov Charney has also adopted an idea from Hustler founder Larry Flint, that of letting the people get what they wish- and pay for. Larry Flint convinced the larger part of his potential readers, of competitor Playboy to cheat on people with glossy, photoshop retouched, softblured pictures, which would never reveal the most vital detail of femality. From researching the Venecian Giacomo Casanova for a previous assignment, I happen to know, that at an appropriate instant, Gicomo would first gently move his mistresses leg aside for proof of beauty.

There is plenty to learn from crm & marketing masters the likes of Giacomo Casanova, Dov Charney and Derek Sivers.

[/column]
It is the expression of style and cultural good of our post-digital era, which American Apparel incessantly produces like no other brand. By which the brand not only keeps busy with internal affairs and their making a profit but exists in permanent arguing with what keeps all involved and their surroundings occupied.

Knitting, dyeing, sewing, photography, marketing distribution and design all happen in their Los Angles facilities. Terry Richardson is a photographer for American Apparel, most of the ads however are photographed by Dov or any of his co workers. American Apparel sports the most socially enabled and engaged brand website I ever came across with a plentytude of bloggers directly engaged and enabled in a feature section called Best of Seen and Submitted Raz Schionning being the web director.

Criticism: Dov Charney had been accused of sexual harrassment by more than one female coworker. During an interview he masturbated in the presence of one reporter and he has appeared in his underwear for many such interviews.
[end_columns]

Should this ad have been banned by the Advertising Standards Authority in the UK? twitter.com/americanappare…